The following is an exerpt from Ankyloglossia: Assessment,Incidence, and Effect of Frenuloplasty on the Breastfeeding Dyad
Jeanne L. Ballard, Christine E. Auer and Jane C. Khoury 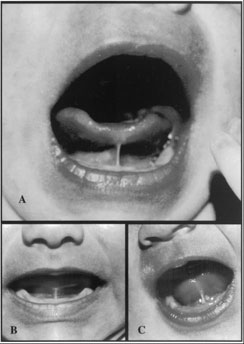 Assessment and Interpretation of Lingual Characteristics

Lateralization is measured by eliciting the transverse tongue reflex by tracing the lower gum ridge and brushing the lateral edge of the tongue with the examiner's finger. Lift of the tongue is noted when the finger is removed from the infant's mouth. If the infant cries, then the tongue tip should lift to mid-mouth without jaw closure. Extension of the tongue is measured by eliciting the tongue extrusion reflex by brushing the lower lip downward toward the chin. Spread of anterior tongue is determined by first eliciting a rooting reflex, just before cupping, by tickling the upper and lower lips and looking for even thinning of the anterior tongue. Cupping is a measure of the degree to which the tongue hugs the finger as the infant sucks on it. Peristalsis is a backward, wave-like motion of the tongue during sucking that should originate at the tip of the tongue and is felt with the back of the examiner?s finger. Snapback is heard as a clucking sound when the tethered tongue loses it grasp on the finger or breast when the infant tries to generate negative pressure. Values are assigned as indicated on the score sheet.

Interpretation of the Hazelbaker Score

Score Sheet for the Hazelbaker Score